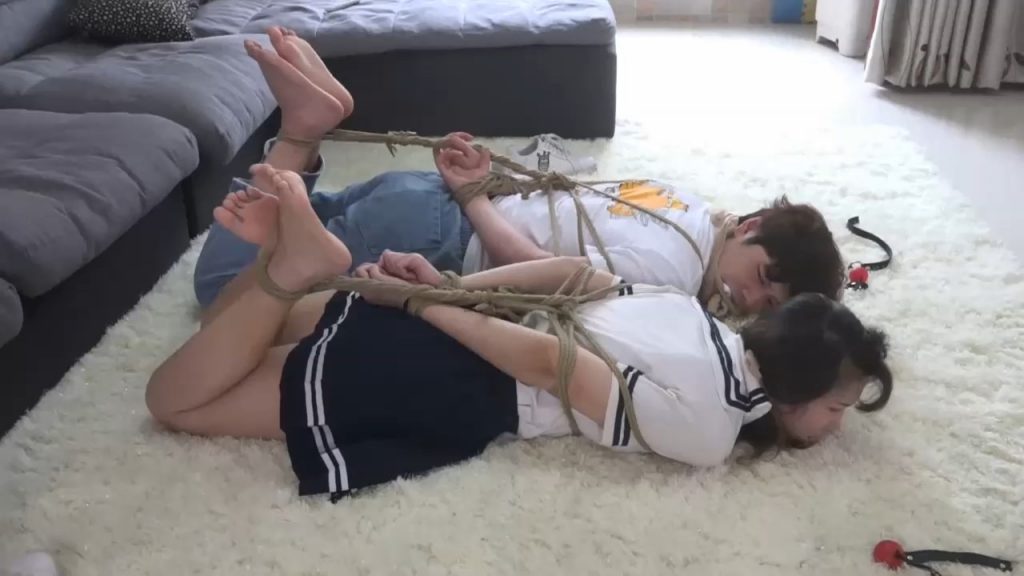 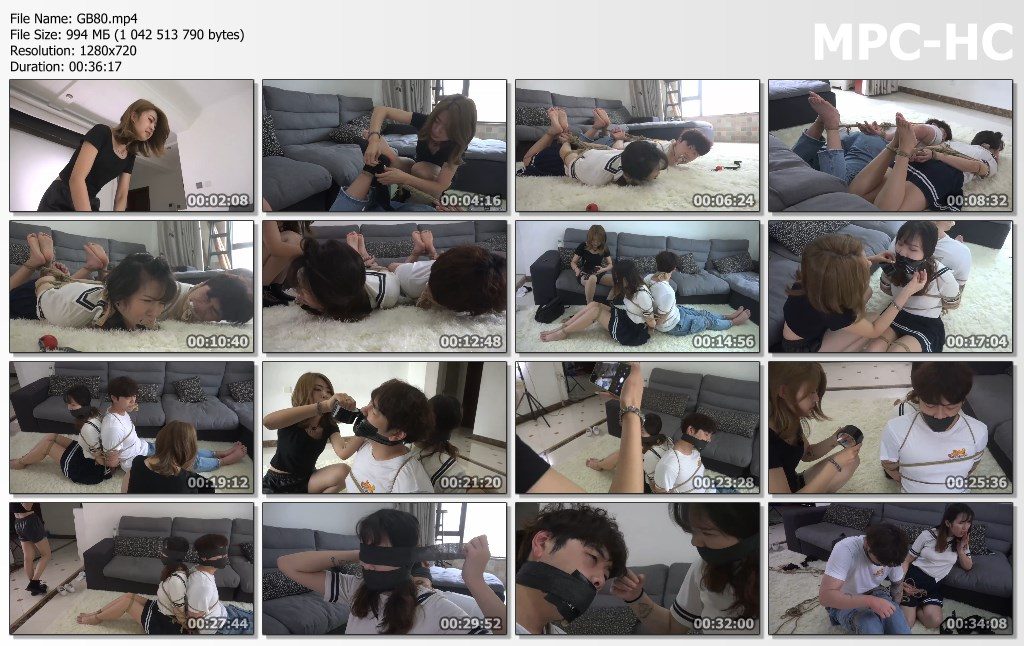 “The young girl, A Miao, woke up from a coma, and was surprised to find that she and her boyfriend were tied to the ground by horses, with gags in her mouth. A young woman in black came over and said that A Miao and her boyfriend had stolen the U disk of the company’s confidential files. The woman in black unlocked the mouth of A Miao, but they said they didn’t know what U disk. It was said that the woman in black recognized the wrong person. Female Bandit in Black: Right? Give you some color to see! The female bandit in black went inside. A Miao complained that her boyfriend should not steal the company’s USB stick, and her boyfriend hurriedly made her whisper. At this moment, the female bandit in black came back and threw two flesh-colored pantyhose and stockings to the ground. She rushed to A-Miao and said: This is the stockings you have worn and taken off these days? A Miao and her boyfriend did not understand what the other party wanted to do. I saw the black bandit quickly took off the shoes on A Miao and A Miao’s boyfriend, and then took off the socks on the feet of the two. The female bandit in black stuffed the smelly pair of black nylon stockings worn on Amy’s boyfriend’s feet into Amy’s mouth, put a pair of white nylon stockings on Amy’s feet into Amy’s boyfriend’s mouth, and then connected them with two flesh colors. Pantyhose and stockings caught the couple’s mouths. Female bandit in black: Since you don’t say it, just eat stinky socks! I’ll find it myself! A Miao and her boyfriend gazed at each other and complained. After a while, the female bandit in black found the USB flash drive. It turned out that the U disk was placed in the toilet washing machine and the dirty clothes piled up. The black female bandit said with a little irony: you’re kinda hiding, let me find it for so long, want It wasn’t I who was careful, I was deceived by you! It ’s so uncomfortable to tie it up. Let me give you a more comfortable posture! The female bandit in black tied the two back to back, sitting on the floor in front of the sofa in the living room. “I will accept the USB flash drive and give you two gifts before leaving.” The black bandit found a pair of white underwear from the bag, pulled out the black nylon stockings from A Miao’s mouth, and said to A Miao: This is my wear Underpants, look at your hands tied, then I have to stuff your mouth. So the white underwear was stuffed into A Miao’s mouth. She could only hum and mourn in pain. The female bandit in black cut out 5 pieces with black electrical tape, sealed it out of A Miao’s mouth, and wrapped it around the back of her head with black electrostatic tape for 5 turns, and then wrapped it with black self-adhesive bandage for 5 turns. The girl in black walked to her boyfriend, took off her shoes, took off a flesh-colored pantyhose and put on her legs, and said to her boyfriend, “Handsome guy, this is the socks I have been wearing for several days. As a commemoration, I’ll give it to you. ”Regardless of Amy’s boyfriend shaking his head, the female bandit in black pulled out the white nylon stockings in his mouth and discarded them. He stuffed this original flesh-colored pantyhose into Amy’s boyfriend’s mouth, and also used black electrical tape and black Electrostatic tape, black self-adhesive bandage wrapped around the seal. The black bandit took several photos of the couple and humiliated each other. A Miao and her boyfriend stared angrily at the black bandit. The black bandit: “Dare to stare at me ?!” Black self-adhesive bandages were wrapped around the eyes of the couple to seal their eyes. “Enjoy it, bye!” The female bandit in black left, leaving the couple twirling their bodies and struggling violently. After some struggle, the two finally broke free of their bonds, lifted their eyes and gags, and pulled out their underwear and socks. Puffing, thinking about how to retaliate against the female bandit in black”