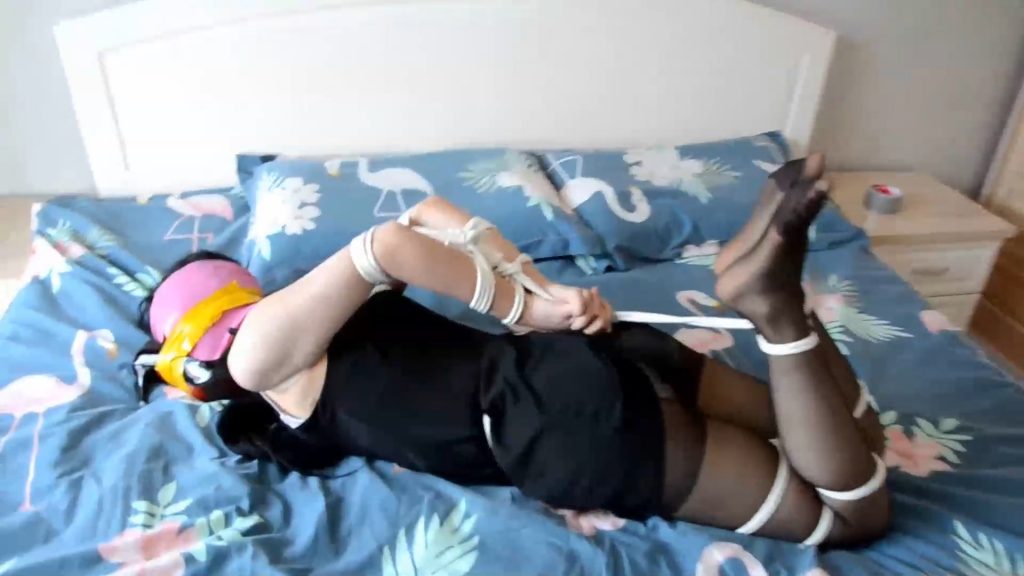 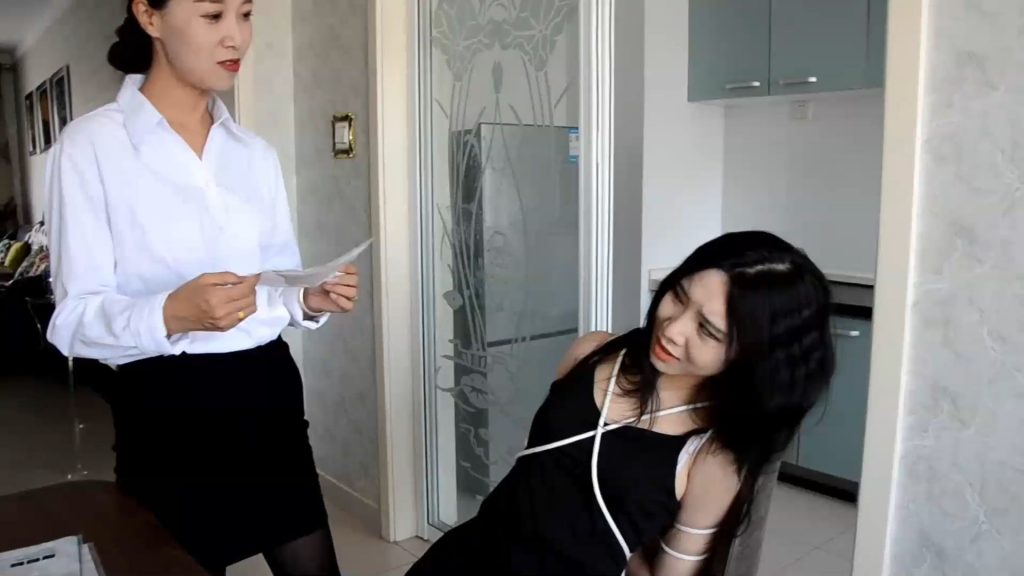 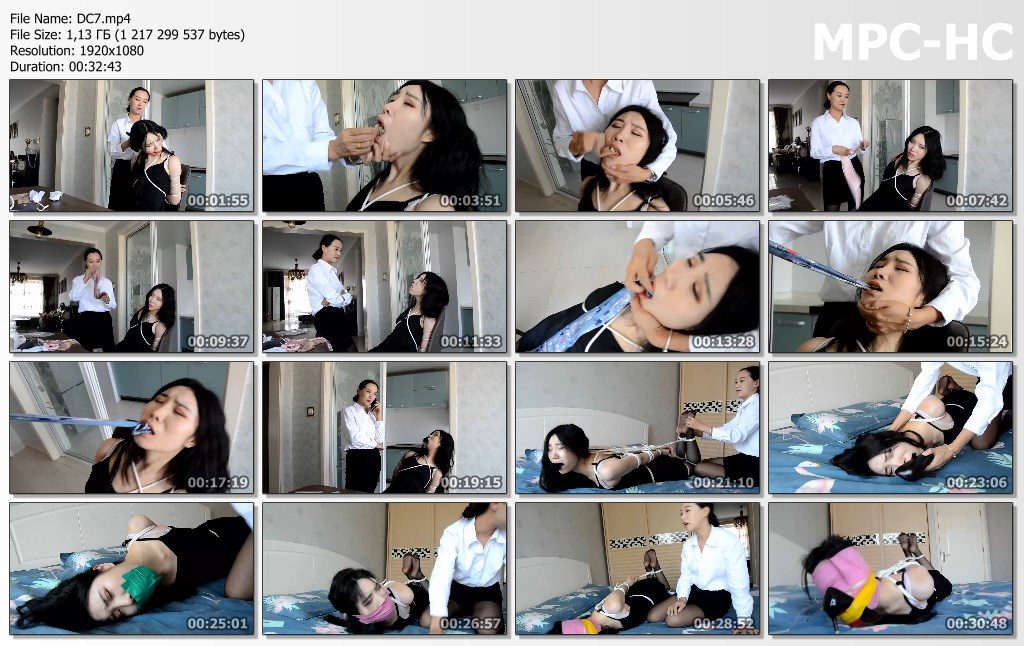 “Produced by Xiaoyao Studio, the female bundled woman who is scheduled to shoot with “Corn Cordyceps” has repeatedly gag to torture the humiliating plot “Shan Wu Er Hu” (starring Xing Jiani and Luo Weiwei) was once a classic old film, and now Xing and Luo are both excellent models. I have left my job. I am fortunate to invite Wen Qing and Wu Han to appear in this regular shooting. I will remake the classic work of “Shan Wu Er Hu”. Thanks to Proud Studio and the two famous models for their hard work, especially Wu Han. Mouth is a great test for the endurance of the model. The plot is basically the same as the original film of “Two Tigers without Mountain”. Wenqing retaliated against Wu Han, a colleague who had opposed her in the company many times, and held Wu Han home to torture. Wu Han was tied up by Wu Hua at the beginning, put on a clog and a black mask, snuggled up to Wen Qing’s house and sat on a chair, Wen Qing began to torture Wu Han! The first gag: a pair of white cotton socks on Wen Qing’s feet. The second stopper: Wen Qing’s original three pairs of flesh-colored short stockings on Wen Qing’s feet, Wen Qing stuffed Wu Wu’s mouth, and said with a smile that it was her six-six-shun. The third stopper: Wen Qing said that he would give Wu Han something to change. He found three small scarves. First, he put a pink love pattern scarf into Wu Han’s mouth a little bit. The fourth time: “Is the mouth sore?” Wen Qing pulled out a pink love scarf and put a fuchsia sapling pattern scarf into Wu Han’s mouth. Fifth time: Wen Qing pulled out a fuchsia sapling scarf, and put a blue cat pattern scarf into Wu Han’s mouth. After the incident, Wu Han desperately begged for mercy. The sixth stopper: Wen Qing pulled out the blue cat pattern silk scarf in Wu Han’s mouth. Unexpectedly, Wu Han called for help. Wen Qing quickly reinserted the scarf into Wu Han’s mouth. Then he took off a plain black pantyhose on his leg and pulled it out. The scarves stuffed the black pantyhose stockings a little into Wu Han’s mouth. Suddenly, someone called Wu Han’s mobile phone (the original film of “Sand Wu Er Hu” in this bridge section) Wen Qing picked up the phone and said to Wu Han: Yo, it was your boyfriend, but you can’t take it now, I Pick it up for you! “Hello, Xiao Wang? Oh, you are looking for your girlfriend. She is sleeping in my house now.” (Wu Han woo woo snorting hard) “You said there is a murmur, haha, this is my newly raised cat It’s annoying, okay, when your girlfriend wakes up, I will let her contact you, bye!” Wen Qing told Wu Han: No one will come to rescue you, give up! Wen Qing looked at his mobile phone, “I’m going out to do something now, I’ll take care of you first.” Wen Qing bundled Wu Han back into a European-style straight-armed horse, tied up, took off the high-heeled shoes on Wu Han’s feet and smelled, “Really It’s delicious, I just struggled to sweat a lot, tired, let me give you a good massage!” I can’t help but say that I used to scratch Wu Han’s ankle in black pantyhose stockings, making Wu Han want to laugh, stuffed in his mouth The mouth is clear and smelly, and the original black pantyhose cannot laugh, but can only murmur murmurly. Wen Qing also put a high-heeled shoe off Wu Han’s foot on her nose and forced her to smell it. The seventh gag: Wen Qing pulled out Wu Han’s black pantyhose stockings, exhausted Wu Han gasped, Wen Qing took a black men’s briefs and shook her, saying: “Finally give you a chance, as long as you I sincerely apologize and I will untie you, otherwise I will wait to eat my husband through dirty underwear that has not been washed for several days!” Wu Han: “The ghost only believes that you apologize!” Wen Qing put this black men’s underwear Stuck in Wu Han’s mouth, Wu Han was so disgusted that he rolled his eyes. “I don’t know how to lift, then you can use my mouth to wash my husband’s dirty underwear!” Wen Qing used green wide tape to seal 5 sheets outside Wu Han’s mouth, then wrapped it with yellow tape for 5 times, and finally used purple self-adhesive Bandages were wrapped around 5 times to seal Yan Shi’s mouth. Wen Qing took a few photos of Wu Han with his mobile phone and deliberately showed her “Look at how beautiful you are now?” Wu Han stared angrily, “Dare to stare at me?! Close your eyes!” Wen Qing used The yellow tape was wrapped around Wu Han’s eyes 4 times, and the purple self-adhesive bandage was wrapped around 4 times. After the incident, Wu Han’s original smelly high-heeled high-heeled shoes were wrapped and fixed with yellow tape, making Wuhan inhale the smell of high-heeled shoes while struggling. “I’m going out to work now, stay here and reflect on me obediently, and wait until I come back to continue to tidy up you!” Wen Qing left, Wu Han struggling violently on the bed, but still to no avail, endured men’s dirty underwear and smelly shoes near his nose Tormented, Wu Han finally reduced his struggle and gasped helplessly in the dark. What to watch: many times (a total of seven times, a pair of cotton socks, six flesh-colored short stockings, three silk scarves in turn, a pair of black pantyhose stockings, a black men’s triangle underwear), the close-up process (closed very slowly , Don’t miss the same thing you like to stuff your mouth), women tied up torturing women, scratching their feet TK, high heels covering their noses, tape bandages around their mouths and eyes”