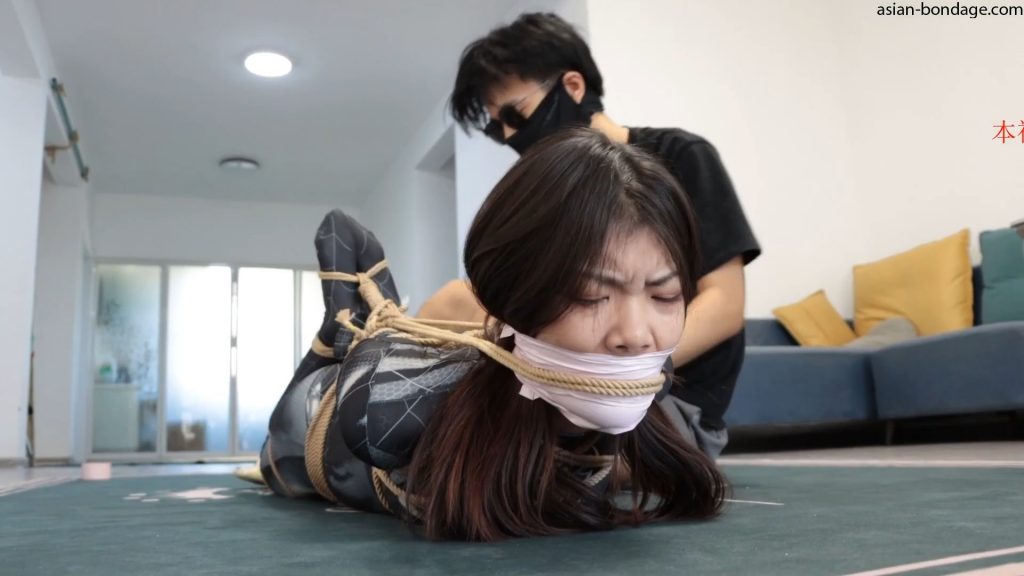 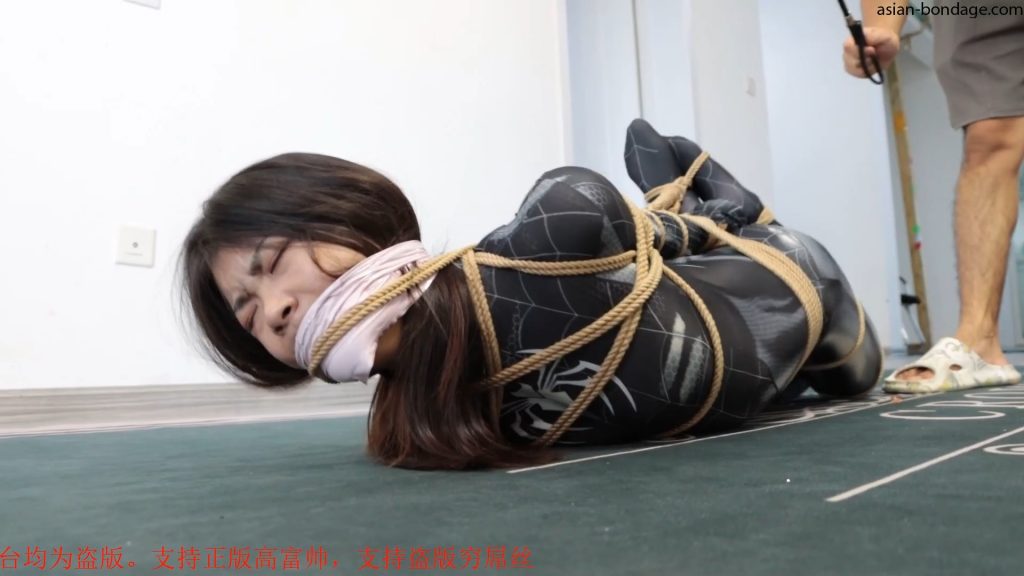 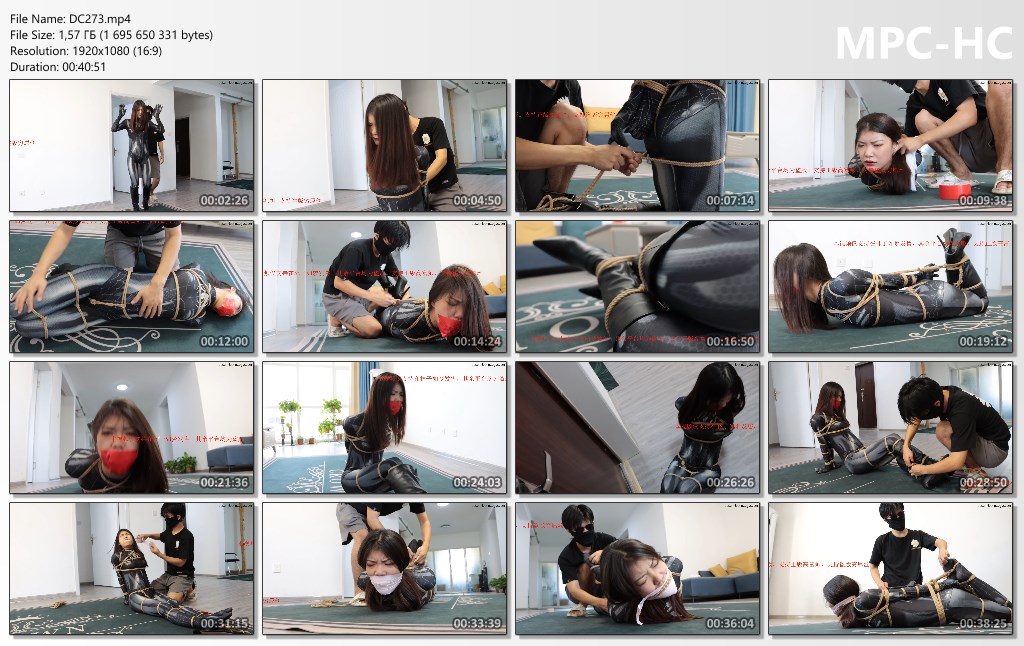 “Plot introduction: In the first act, the black female spider sneaked into the villain’s lair, and found a bunch of rope crime tools in the living room. She took pictures and collected evidence. In order to find more evidence, she continued to search in the room, and found a piece of paper when rummaging through the boxes. Article: I expected you to come, these rope tapes are for you! Spider-Man is still looking at the evidence in the cabinet in front of her, unaware that the danger behind her is approaching like her! I saw the bad guy patted her. When Yuchen turned around, she received a heavy punch, her eyes were black, but before she could react, she was pushed down on the bed by the bad guy and coerced her. Yuchen thought to himself: now is not an opportunity, first listen to his waiting for the opportunity. Yuchen obeyed obediently, was pulled up by the bad guy and asked her to raise her hands, then pushed her to the living room, forced her to kneel down, and tied her with a rope! The upper part of the body is bound with European-style straight arms, and the lower part of the body is tied with ropes, thighs, calves, and ankles. The bad guy patted Yuchen’s buttocks and decided to play with her. The towel blocked Yuchen’s mouth and sealed it with five pieces of duct tape. Then began to pat Yuchen’s buttocks, turned over and pulled her strands, so happy. Playing with the sturdiness, the bad guy decided to destroy the evidence, crossed Yuchen’s ankles, and then tied it even more severely, and Yuchen’s upper body was raised, although he went to destroy the evidence. Yuchen struggled on the ground and whimpered. In the second scene, Yuchen struggled desperately, tossing and turning on the ground, stretching her feet back, extending her arms forward to make her body arch up On the ground, she used her small buttocks to move towards the door, lay down at the door, and touched the door handle with her feet, trying to open the door to escape by this method, but the bad guys watched her every move in the surveillance, and randomly took it. The rope and tape came to stop Yuchen’s behavior, then tied her feet, dragged her to the living room, and then the male protagonist hugged her, patted her buttocks, and pulled her strands, Yuchen woo Woohoo, the bad guy said: It makes you dishonest, it’s too comfortable to tie it up, isn’t it? Afterwards, seeing Yuchen’s moving feet, she decided to take off her boots and gag her socks with her socks. Yuchen began to struggle. Struggling), as the white socks were exposed, a smell mixed with sweat and leather came to the nostrils, and the bad guy said: This smell is strong enough, put it in your mouth! Yuchen turned her head to protest, but the man doesn’t care about her! Tear off the duct tape on the mouth, took out the towel, then pinched her mouth to let her open her mouth, put the original white socks with mixed flavors into her mouth, and then wrapped her mouth with pink tape, Yuchen was disgusted. Distorted, but helpless, the scolding and protesting turned into a whine! As mentioned in the previous article, the bad guy feels too comfortable to be tied up, and he wants to give Yuchen a severe sentence, please see the next scene. In the third act, the bad guy put Yuchen on the ground, and then started to tie the horses and hooves with ropes. In particular, the poses in this show are all based on European and American tight binding postures. At present, only Yuchen can do tight bindings that satisfy me. Thank you again for the hard work of the model! The European and American horses shoved their hooves upside down and tied Yuchen’s whole body in place. The ropes that went around his mouth, elbows and ankles made Yuchen’s head, hands and feet unable to move forward and backward. The rope was tied around his waist twice, so that Yuchen could not move. She couldn’t move her hands left and right, she was like a zongzi, waiting for the bad guys to play with her and she was helpless! In the face of such a strong beauty tied up, a man can’t help it, let alone a bad person? Long horsewhip, slap all the way to her hips, wait on her chest and face, the female Spider-Man is so uncomfortable, the bad guy makes the female Spider-Man happier, scratching the soles of her feet with one hand, and a long horsewhip in the other to serve her upturned buttocks, I don’t know the female spider Xia’s woo woo is pain or happiness, please imagine for yourself. Tortured until the bad guy was tired, dragged the female Spider-Man by the chin with a long horse whip to make her look up, then patted her face, told her to stay honest, and went to give her the bad guy clothes, the female Spider-Man struggled on the ground, and the bad guy would come in a while To throw Rocket Girl’s clothes on the ground and ask women to put them on, but Spider-Man shook her head and refused, the bad guy wouldn’t take care of her thoughts, lying on her body and tearing her clothes off and stripping her off!”