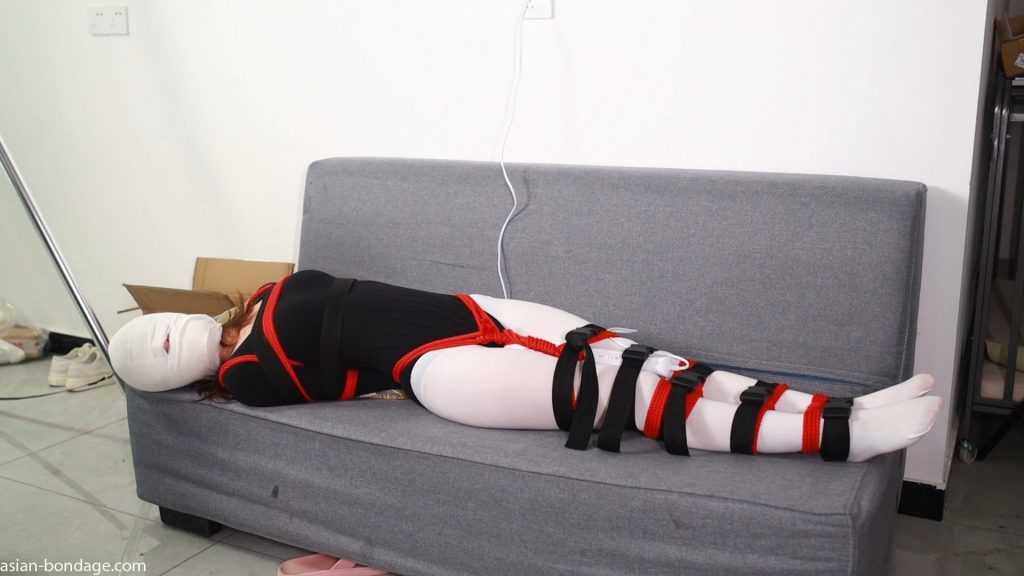 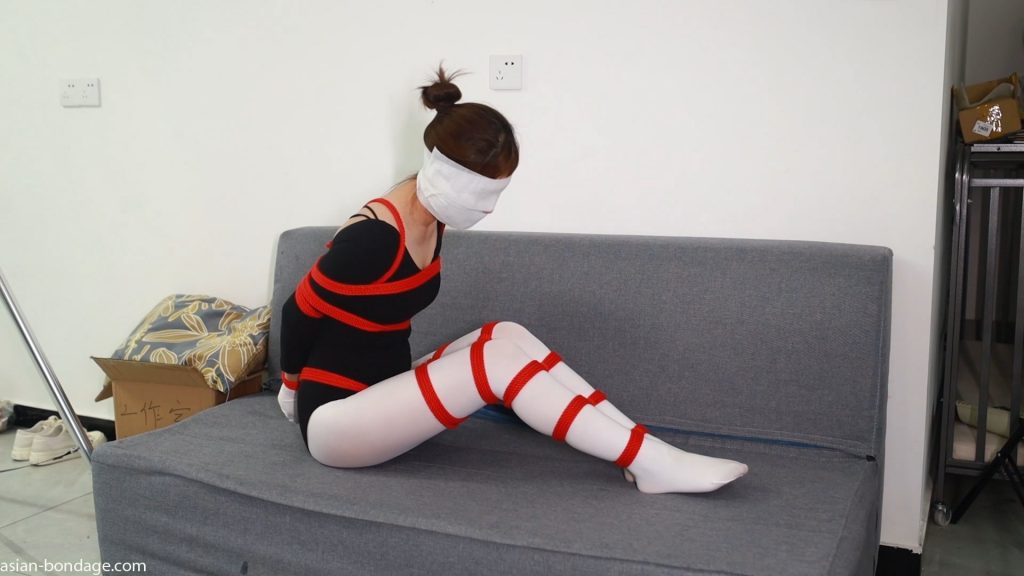 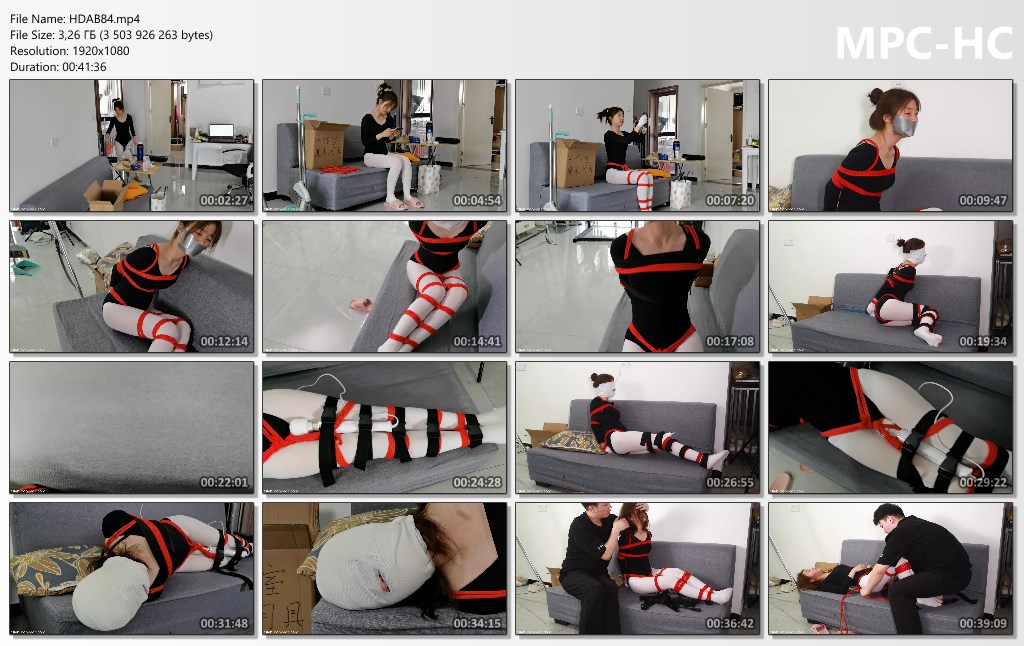 “Wenwen is a female member of a ballet company. After practicing today, she went home wearing a sporty outfit. She had just returned home and received an unknown package at the door with the words “Studio Magic Appliances” written on it. She put the package on the sofa. After she sat down, she took off her shoes, then stockings, yoga pants and sweater. After taking off these, she was only left with the long-sleeved black exercise suit and white thick pantyhose she practiced today. Then she put on slippers and put the clothes she took off back to the room. After she came out, she found that the package was magically opened by herself, and Wenwen went to see what was inside. The package contains a large amount of red cotton rope, a roll of silver sealing tape, a few rolls of white bandages, and a pair of flesh-colored stockings. And multiple belts. A message came from Wenwen’s phone on the sofa. It turned out to be her boyfriend’s. Wenwen sat down and exchanged messages with her boyfriend happily. Maybe Wenwen was too focused and didn’t mean it. A red cotton rope suddenly tied an 8-fold “8-shaped knot” to her ankle. Wenwen looked down and found that she had been put on her ankle by this weird “8-character knot” for no reason. Although she didn’t know why, she still solved it. Soon after she was untied, her ankle was tied again with 8 circles of “figure eight knots”. This time, even the calf and the lower half of her knees were also covered with 8 circles of “figure eight knots”. The cotton rope seemed to be alive. Similar. Wenwen is now tied in three places on her legs, but she can’t untie it this time. Wenwen didn’t give up breaking away from the bondage, but after a while, cotton rope was tied to the upper half of her thigh and knee, and her legs couldn’t be separated no matter how struggling. Still wearing slippers, she stood up vigorously and tried to jump to the table to get the scissors. When she was halfway through the jump, a cotton rope had appeared around her waist, tightly tied to the crotch that passed through her, and there were several knots between the strands. At this time, Wenwen could only endure the stimulation between the strands and jumped to the edge of the stage. Just when she wanted to pick up the scissors, her hands were suddenly wrapped into two fists by the white bandage, making her unable to pick up the scissors. At this time, she still didn’t know what happened, she chose to endure the stimulation of the rope and jumped back to the sofa, of course, every step was also very hard. She intended to use her wrapped fists to press the phone to call her boyfriend for help. Just when she was almost successful, her arms were pulled back by an unknown force, and her wrists had been tied with 8 circles of “figure eight”. Tight. She continued to struggle, trying to make a call with her fist as best as she could, but at this time there were 8 more rounds of “figure eight knots” that tightened her elbows, causing her arms to be forcibly straightened, and the knots on the wrists were even more incompatible. The strands are tied together. The more she struggled, the more and more cotton rope she had on her body. A long cotton rope was tied together by her upper and lower chest and arms. At this time, mm’s entire upper body could no longer move. Just when Wenwen wanted to scream for help, the wrapped flesh-colored stockings walked into her mouth, filling her whole mouth completely. Wenwen continued to struggle, making a “woo-woo” sound in her mouth, and her whole body kept undulating. Wenwen tried to spit out the stockings from her mouth, but then, silver tape covered her entire face and chin. It hadn’t stopped yet, a whole roll of white bandages even wrapped Wenwen’s face, and she had lost even the last way to call for help. What she didn’t expect was that a ZDB was held tightly against the crotch between her legs, and the ZDB was also activated by an unknown force, making Wenwen’s whole body softer. Wenwen tried his best to prevent the advent of GC, but the white bandage wrapped Wenwen’s entire head except his nose and turned it into a piece of white, as if it were a mummy. At this time, Wenwen, who was deprived of his facial features and bound his limbs, finally couldn’t help the GC. He kept sending out a “stop” signal, but did ZDB stop. Wenwen has not known how many GCs he has experienced. At this time, her boyfriend finally came back. He saw that his girlfriend was tied up by an unknown person, and quickly went to help her out.”